Hey there every peoples!

Quick post to make a shameless plug. I have long told others that my sin is envy. I’m not religious, but i think of sins more as character flaws than spiritual detriments. I could go into all the baggage that has been stirred up by this announcement, but who cares about that? This guy has less than two days to meet his goal so we better waste no time on me (again, who cares, so it would just be a waste anyway).

Brian Switek is perhaps one of the best paleo writers out there. One may disagree with some of the things he’s said, but you can’t deny his charisma and writing skill. Well now he has a most ambitious project. Called “Have Allosaurus Will Travel- Fossil Tales from the West“, he plans to spend the summer visiting the most famous fossil localities in the west, from household names like the Cleveland-Lloyd Dinosaur Quarry,  Natural Trap Cave, and Ghost Ranch to rising stars like Tule Springs National Monument, Hanksvillle-Burpee Dinosaur Quarry, and Grand Staircase-Escalante. Not only will this odyssey (makes the one i took in April look like a weekend fling) result in a new book, but he will provide updates from the field via his blog and youtube. But he needs your help.

Getting out into the field is not easy. It requires a vehicle that can traverse rough terrain and clear obstacles. So he started a kickstarter to get himself a proper field vehicle. Nothing too fancy: a truck or suv with 4-wheel drive and plenty of clearance. Unfortunately even used cars are not cheep (unless they are right broke. My dad managed to sell my previous car for $400 when the transmission died. Of course a car that cheap would take so much money to properly fix up you’d be better off using the money on something that isn’t a broken down piece of crap!). So he is trying to raise funds to get a vehicle that can take him to hell and back (the summer time heat, rough terrain, and often imposing geology does stir up visions of hell). 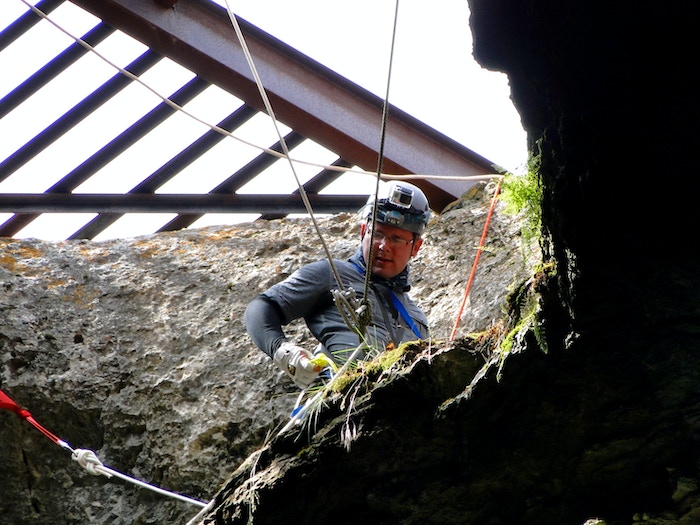 Switek Descending into the depths of Natural Trap Cave. Photo by Eric Scott.

So go chip in. I have already given him what paltry sum i have left. Too he isn’t coming my way, or else i could offer what little knowledge i have (closest he is getting is Tule Springs, Nevada). But I feel like places like Barstow (type locality of the Barstovian NALMA, in California’s beautiful Mojave Desert) and the John Day Fossil Beds (A spectacular 40 million year record of geologic and biologic evolution in the backcountry of Oregon) should have been on the list given their enormous contributions to paleontology. But judging from his description they probably don’t meet his needs. Regardless, he is 3/4 of the way to his goal, so give him a hand. I have a feeling that even though he isn’t degreed, he may well earn a place alongside many of the great paleontological minds of our day, like Thomas Holts and Jack Horner.